What am I blogging about, today? Books that aren’t covered in termites or chemicals meant to massacre them, of course. Namely, the book, Can’t Stand The Heat by Louisa Edwards. This book is number one in Edward's Recipe For Love trilogy. To date she has written, 1 Can’t Stand the Heat; 2 On the Steamy Side and 3 Just One Taste. I’ve loved them all, so far.

“He had to pull himself together and he knew just how to do it, too.

Adam was going to make pate.

…It was he best way he’d found to get calm and collected: make something with a lot of steps, in intricate layers that all had to harmonize together.

He was finally starting to breathe normally again…”

Here is a shimmering sentence that speaks of Chef Temple’s passion for cooking.

“Cook like your heartbeat is connected to the movement of your hands, like it’s life-or-death every second.”

Reading this philosophical statement from food critic Miranda Wake - do you agree or disagree?

“The key to happiness, or at least, the key to contentment, Don’t Want What You Can’t Have.”

There is a sweet subplot that runs through all 3 books so far that is the gay romance of Jess and Frankie.

“Frankie pushed off the wall and sauntered closer. Jess felt trapped by his own magnetic attraction; as if Frankie were a planet he was revolving helplessly around, and yet he didn’t exactly want to escape.”

As a rebel, this resonates with me and I like that she has put just a touch of cockney accent in Frankie’s speech; not enough to be irritating, just enough to be fun.

“Sometimes, though, you have to break your own rules.”

Frankie nodded. “How you know you’re alive, innit? I’ve broken damn near every rule society, the Church, or my own mum could come up with at one point or another - taken every drug, drunk myself into a stupor, danced with the devil himself, and come out grinning. But it’s not for everyone…”

Can the passionate chef help the pessimistic food critic to arc?

“She was beginning to understand and appreciate Adam’s hedonistic love of life, as well. That ability to live so fully and truly that every action, every sensation, was magnified a hundredfold. Miranda had taken many short, exhilarating dips in the incandescent river of energy that poured through Adam, and she thought she could learn to navigate it pretty well, if she had the time.”

I remember a time when I felt like this - I need to develop this passion again:

“Perfection isn’t your goal; ceaseless struggle is your goal. Never losing the drive to be perfect is your goal. And taking it all seriously - like you said that first night, it’s always life-or-death to you.”

Chef Adam Temple loves words as much as I do:

“You know I love it when you use those ten-dollar words and make sense out of everything in my head.”

What ten-dollar words jumped out at me from this book?

pastiche:1 mixture: a piece of creative work, e.g. in literature, drama, or art, that is a mixture of things borrowed from other works

2 imitative work: a piece of creative work, e.g. in literature, drama, or art, that imitates and often satirizes another work or style

It’s so very precise. She could have said satire or imitation but this word says what she means even better.

I want to be insouciant.

Once upon a time I loved punk rock and this book brought that back. Don’t roll your eyes at me. I bet there is a punk song or 2 that you love and don’t even know it’s punk; for example, the goddess of punk, Patti Smith’s Because the Night; not as good as the song mentioned in the book, Kimberly, but good. Or how about the Buzzcocks song Ever Fallen In Love With Someone? Gratuitous lovely mentions also of Siouxie and the Banshees, the Ramones, the New York Dolls and the Velvet Underground and Nico.

She mentions some familiar and unfamiliar artists, also. She speaks of Mapplethorpe’s famous photo of Patti Smith. I love Mapplethorpe.

I was completely unfamiliar with “Uelsmann’s dreamscapes” which turn out to be photographic collages created in the darkroom of photographer, Jerry Uelsmann such as this one entitled the Committee: 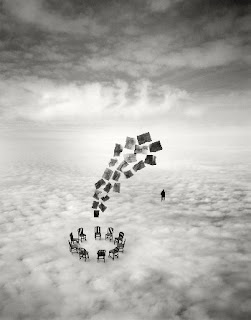 But I do love Louisa Edwards. I went to her website to see if she had culinary experience because the world she creates behind the scenes of the restaurant in her books seem so genuine. She does.

I’m happy to say that Louisa has another trilogy, the Hot trilogy coming out next year. It has crossover characters from the RFL trilogy and I eagerly await the release of the first book, Too Hot to Touch in August of 2011 followed by book 2, Some Like it Hot, due out November 29th, 2011 and then Hot Under Pressure out in April of 2012.

And if I try one of the cocktail recipes in the back of the book, maybe I can forget about the termites!
Posted by Judy,Judy,Judy. at 6:33 AM