Is truth always what we need?

Ominous sentence:
“Then, beneath my fingers, the handle to the third room began to turn of its own accord.” The Thirteenth Tale by Diane Setterfield

This is not a romance novel. It’s a Gothic in the true sense of the word. It does have an HFN (happily-for-now) ending but there is depravity and human suffering in the body of the book.

Beautiful Gothic paragraph alert:
“The house sat at an awkward angle. Arriving from the drive, you came upon a corner, and it was not at all clear which side of the house was the front. It was as though the house knew it ought to meet it’s arriving visitors face-on, but at the last minute couldn’t repress the impulse to turn back and gaze upon the deer park and the woodlands at the ends of the terraces. The visitor was met not by a welcoming smile but by a cold shoulder.” The Thirteenth Tale by Diane Setterfield

And then there is that creepy feeling of stasis, suggesting that this evil has gone on for years, making one feel helpless to change it.

“For thirty years the pace of life indoors had been measured by the slow movement of the motes of dust caught in an occasional ray of weary sunlight.” The Thirteenth Tale by Diane Setterfield

Chilling passage alert:
“I did not see the wolf when he came. I did not hear him. There was only this: A little before dawn I became aware of a hush, and I realized that the only breathing to be heard in the room was my own.” The Thirteenth Tale by Diane Setterfield

Sentence that says something it doesn’t say alert:
“Were I to look all day and all night, I knew I would not find a trace of the twins he was supposed to have fathered.” The Thirteenth Tale by Diane Setterfield

In the village where a Gothic takes place you have to have the people judging
“‘behavior’ (a village euphemism for ‘misbehavior’)" The Thirteenth Tale by Diane Setterfield
And can’t you just hear the voice dripping in judgment saying that word ‘behavior’.

What about truth? Can a Gothic novel impart truths? How about an even more important question? Is truth always what we need?

“My gripe is not with lovers of the truth but with truth herself. What succor, what consolation is there in truth, compared to a story? What good is truth, at midnight, in the dark, when the wind is roaring like a bear in the chimney?…When fear and cold make a statue of you in your bed…What you need are the plump comforts of a story. The soothing, rocking safety of a lie.” The Thirteenth Tale by Diane Setterfield

Nevertheless Settlefield does impart some truths in this book.

“Perhaps emotions have a smell or a taste; perhaps we transmit them unknowingly by vibrations in the air.” The Thirteenth Tale by Diane Setterfield

Is that why sometimes you know that someone is not okay or fine even when they say they are?

“People whose lives are not balanced by a healthy love of money suffer from an appalling obsession with personal integrity.” The Thirteenth Tale by Diane Setterfield

I know the truth of that one personally. If you dispute it, e-mail me privately and we’ll talk.

“Human lives are not pieces of string that can be separated out of a knot of others and laid out straight. Families are webs. Impossible to touch one part of it without setting the rest vibrating. Impossible to understand one part without having a sense of the whole.” The Thirteenth Tale by Diane Setterfield

We all know the truth of that one.

“Inside my head everything came to pieces and came back together differently, in one of those kaleidoscopic reorganizations the brain is capable of.” The Thirteenth Tale by Diane Setterfield

I love when that happens.

“Miss Winters restored to me the virginal qualities of the novice reader, and then with her stories she ravished me.” The Thirteenth Tale by Diane Setterfield

This book ravished me. I usually devour a book in one or two sittings. Not this one. It was like playing with fire. I read some. Put it down and read something else, all the while keeping it in the corner of my eyes. Then picked it up and read some more…lather, rinse, repeat.

She mentions a book that I absolutely adore: The Water-Babies by Charles Kingsley.

And a book that I’ve never heard of but will certainly have to read: The Eustace Diamonds by Anthony Trollope. (IT WAS WRITTEN IN SERIAL INSTALLMENTS FOR A NEWSPAPER IN THE 1800’S. Just like the one in the novel that inspired me to write a novel in installments for this blog.)

She speaks of the painting of Dickens in his study by Buss. Bing images has it but I’ll let you go look. I wasn’t that impressed.

She frequently refers to a lych gate. Wikipedia says:

“A lychgate, also spelled lichgate, lycugate, or as two separate words lych gate, (from Old English lic, corpse) is a gateway covered with a roof found at the traditional entrance to a (English) churchyard.”

This one from Bing images is decorated for a wedding: 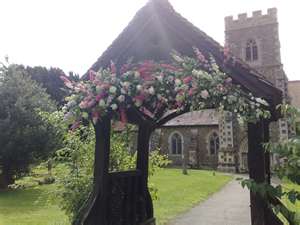 She talks about two plants I’d never heard of:

Buddleia - Here’s a picture of it with a Painted Lady Butterfly (cause I can’t get away from those butterflies!) from Bing images: 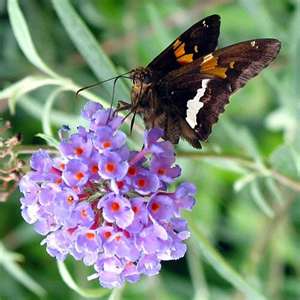 And Hellebore. This Bing image is of a variety called Hellebore Flash Gordon: 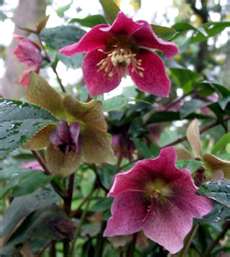 I liked this book for expanding my horizons and for clarifying something for me about my tastes. This was a Gothic novel in which the supernatural element is revealed to be human depravity in the end. I don’t like that. I prefer my ghosts to be ghosts, as in Maybe This Time by Jenny Crusie, one of my favorite books of all time.

I’m going to go read MTT for the umpteenth time and maybe talk about it Wednesday. What are you reading?
Posted by Judy,Judy,Judy. at 5:12 AM