Entertain me, don't bruise me

In an age-old, clichéd because it’s true, dramatic turn of events, Laura Thyme (Pam Ferris) is being divorced by her husband of 2+ decades for a much younger woman.

The two women meet due to, of course, a suspicious murder - which they naturally solve.

They form a friendship and a landscaping design and consultation business. Everywhere they go, a murder happens and they need to solve it.

It sounds like a predictable, dull British television show. It’s not. Netflix accurately describes it as suspenseful and witty.

Rosemary & Thyme is very entertaining. Why? That’s a bit of a mystery in itself. 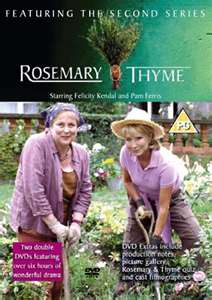 So is the appeal of Last of the Summer Wine.

It centers around three elderly gentleman who band together to avoid work and nagging women. They take long walks that end in naps in beautiful outdoor scenery. They go to pubs and the local teahouse. They assist their friend Howard in his ‘affair’ that never results in sex with his mistress but gets him into trouble with his wife.

The ladies have tea and talk about men and their lives.

Netflix describes it accurately as goofy, understated and witty.

In both shows, the scenery is part of the attraction. It’s beautiful, lush and soothing.

In both cases, the people are authentic. No perfect plastic-surgeried, botoxed, everyone is thin and sexy, pseudo world.

In fact, in LOTSW, it’s a running joke that Cosmo (one of the elderly gentleman) is mad about Nora Batty. Nora Batty is elderly and not thin. Her looks are severe. She wears weird hats and her stockings are always wrinkled around her ankles. 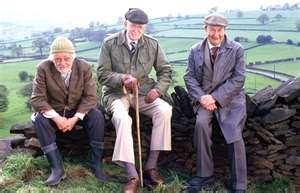 The comedy is funny but innocent funny. Laughing at the faults and predictability of human kind.

The plots for the murder-solving are complicated but not depraved.

You can sit down to both of these shows and know you will be entertained but not bruised.