I'm reading some Susan Donovan books right now; a romantic comedy trilogy. There is a group of women who work together at a newspaper. They form a very dysfunctional dog-walking group. Each book is the story of one of the women.

You know how all romance books have similar scenes, etc except you, well I, don't get tired of them because the voice is different and they're not exactly the same, like snowflakes?

Well, Susan Donovan is an exception to that. In each of her books there is something wildly different. I don't want to spoiler so I'll just say -

in Ain't Too Proud To Beg - the first book, about Josie Sheehan and Rick Rousseau - the scene where she first has Rick to her apartment made me almost wet my pants from laughing and it's - UNIQUE.

in The Night She Got Lucky, about Ginger Garrison and Lucio 'Lucky' Montevez - a natural human phenomen occurs during an unusal weather phenomenon leaving you shaking your head in wonder - UNIQUE.

in Not That Kind of Girl  - the third book - about Roxie Bloom and Eli Gallagher - the scene where they first make love - very entertaining and very UNIQUE.

There is a fourth woman in the dog-walking group, Bea, her lesbian love story is briefly told in Not That Kind Of Girl and it's sweet.

In all the books there is a wonderful woman, Mrs. Needleman. We meet her in book one when Josie writes the obituary for her husband of umpteen years (she herself is in her eighties). She's a matchmaker full of wisdom.

In Ain't Too Proud To Beg she says: "And from the beginning of time, anger and fear had been love's most formidable foes."

In The Night She Got Lucky she says: "You could still get lucky, but if you spend all your time worrying that you're over the hill, then you'll miss your chance to be over the moon."

In Not That Kind of Girl "...she'd picture the passing of time as a kind of poem, a poem that looped around and repeated itself in places, yet always charged ahead toward the inevitable end. And when it was over, love was the only thing that remained."

Over in Julieland Saturday's blogpost led to a discussion which unsuccessfully tried not to be about  double-clicking-one's-mouse which reminds me of a book one of the characters is reading - the DIY Guide To Female Orgasm. That book doesn't exist but this one does - Amazing DIY Orgasms: A Girl's Guide to Pleasuring Herself by Roseann D. Bell - but only on Kindle. Makes me want to go out and buy a Kindle. I will probably not write a blog about it, though.

You can find more about Susan and her books on her website. 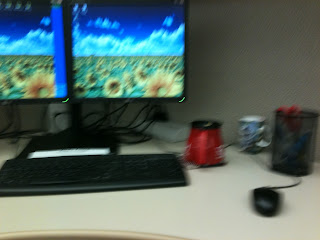 Whoops - it's a little blurry. Oh well, you can see it's pleasant. That red cup is a nice company issued cup so that no one spills on the computer. Being a spiller, I greatly appreciate it. 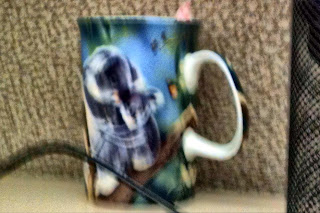 Here is a close up so that you can see - the only decoration I've added so far is the kaola bear cup that Kris sent me from Australia. It's filled with hard candy peppermints in case I have throat troubles while talking.

Here is a pic of the bookmark she also sent me. It's not on my desk because while stealing has never been a problem at this company, I might be able to replace the cup with another cup with koala bears (though not the exact one) but I don't think I could replace the bookmark. 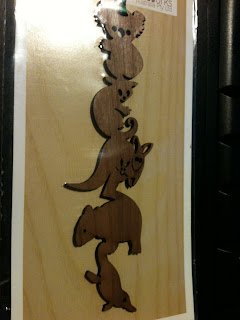 The dark brown is a wooden bookmark. The light brown is the packaging. Beautiful, huh?

Hope everyone is having a good week.﻿
Posted by Judy,Judy,Judy. at 1:31 AM