I know you're all just dying to hear about my demolition derby adventure. Well it was just that, an adventure. And fun!

Let's start with my most heart-stopping moment. It came during the main event towards the end of the night and to bring you into the moment with me I'm going to show you two pics. 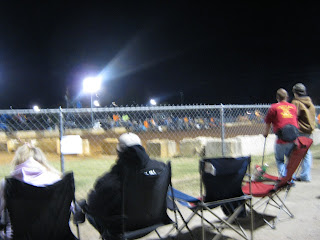 Notice in front of the fence there are several large concrete barrier blocks to keep the cars from coming through the fence and hitting spectators. Notice the girl in pink. I was sitting right behind her. Something told me to stand up and move. Five minutes later that concrete corner barrier looked like this: 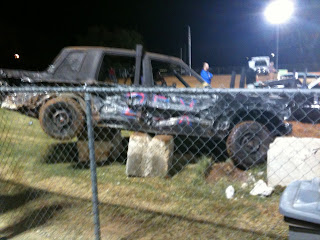 ﻿
The girl in pink dove for the ground and screamed. We helped her up and she told me her knees hurt a little but her pride hurt a lot. I told her I thought she was very brave because if I had still been sitting behind her, I'd have hit the dirt, screamed, AND peed in my pants.

Here is the picture of the very cute piece of demolition derby swag I bought. 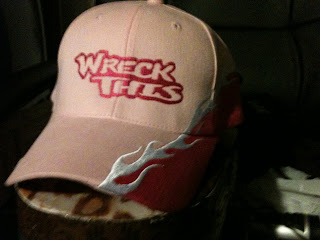 I didn't get a picture of the most amazing car or it's driver. (It's no myth that most of the men driving these cars are attractive, btw.) The car was black and green and had this painted on the side derbyfreak.com. Of course, by the end of the night you couldn't read it.

Derby Freak was amazing because he drove through most of his first 'heat' with only 3 tires. Then, between heats, he fixed the tire and came back to take second place in the main event. Awesome, huh?

The same DF driver also drove a lawn mower in the lawn mower derby. You read right. They had a demolition derby with lawn mowers.﻿ Now that, imho, is freaky.

It's also loud. I expected that.

What did I learn that was useful to me as far as writing a character who is a demo driver is concerned?

They have a 'powder puff' derby that they seemed to confine women to. Or did they? A question I need answered is - if women wanted to drive in the main event, could they? Cause that's where the best money is. I don't even know what the powder puff derby paid because it's not in any of the promos.

I definitely got a sense of atmosphere but next time I need to go to the pit and experience the difference. You can do that for just five bucks but my knees were giving me trouble this time so I didn't.

I got some terminology & a better list of questions I need answered.

There was some very controversial rule change they did for this derby. Usually you can NOT hit the drivers side door. At this one you could hit it if you were going backwards because drivers had been using their doors in some kind of way the rule makers wanted to eliminate. Need to find out what that was about.

And I had fun. With my gkids & my son-in-law. We will probably go again the first weekend in November. That one is a little closer to home.

Oh and I learned that Country Boy productions does a very good job of putting on the event in a safe, responsible, manner that still allows for a very good time.

Can I live in this world of alpha males, loud noise and wrecking cars part-time for the 4 months or so that it would take me to write a romcom? I think I can.