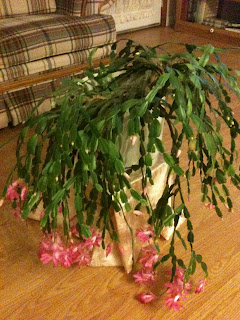 When Alfonso first told me his name, he wasn't sporting the beautiful pink blooms you now see. I thought I might have heard wrong. No, he assured me, he's a he and his  name is Alfonso. He likes to cross dress around Thanksgiving. He's supposed to be a xmas cactus, but, like me, he doesn't like xmas. So he blooms at Thanksgiving. 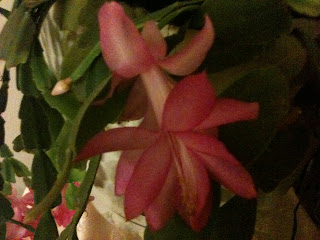 As you can see his blooms are glorious and pink. He's quite vain. He's also a player. He will generally find a way to make us move him close to the lady of his choice. He caused a split between the happy couple, Oscar and Begonia by dropping a leaf into Begonia's pot and conceiving a love baby. 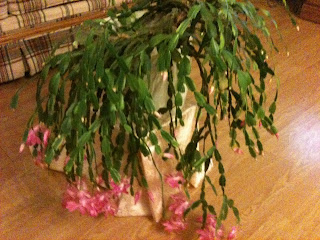 He won't let you see it, but right now he's depressed. He's the only plant that has been moved indoors. All the ladies he loves are still outside on the porch. He's being strong and decking himself in his pink finery as if nothing were wrong, but I know better. 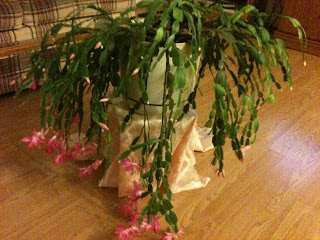 In her book, How I Write, Janet Evanovich says that she gave Stephanie Plum the hamster, Rex, so that there would be a heartbeat in her apartment. Something to talk to when she came home. I've toyed with the idea of doing the same thing with plants; creating a character who shares all her secrets with her plants.

Apparently my aloe plant, Gladys, who has produced many generations of children and has progeny in many homes throughout my family, knows something juicy about Alfonso. She won't tell me what, but she's the only lady I know who can resist his charms.

How was your Thanksgiving? Mine was good. Lots of food. My grandkids and I finished up their quilt blocks. Well, Kat still has a little bit of fabric painting she's going to do, but, my part, supervising the designing, cutting and sewing is done. And no one got burned using the iron. That's a win. The quilt blocks have to be postmarked by 5pm on Dec 2 and on their way to the National Quilt Museum so finishing them is a relief. My gkids have participated in the School Block Challenge for several years now. They can partipate until they are eighteen by which time they'll have quite a few blocks towards a quilt.

Do you have any plants? Do they talk to you? To each other? Any ideas about how I can get Gladys to reveal Alfonso's secret?

PERSONAL MESSAGE FOR BARB N:
Dear sweet generous lady, thanks for the box of books. I read Say No To Joe by Lori Foster* in the last couple of days. It was the fun escape I love from books. I don't know why but I don't have your email address. And being technilogically lame, I don't have the default email thing loaded correctly so when I go on your blog and try to click on your email, it won't let me email you. So I'm saying thanks here! I'm never so happy as when I get a box of books so guess who I'm thankful for this Thanksgiving - you, Barb N, you!

*I originally had this creditted to the wrong Lori. My apologies to both Lori Foster, who did write it, and Lori Wilder, who didn't. My bad. Sorry.
Posted by Judy,Judy,Judy. at 11:36 PM