A week ago I posted a blog about the book, The Language of Flowers by Vanessa Diffenbaugh. The book stays with me, teaching me things. The actual practice of having a conversation using flowers instead of words is called FLORIOGRAPHY. (We all know how much I love new words!)

Anywho - in floriography when you see winged seeds, you think - message coming in - because they are messengers.

When I was trying to find a common thread for all my seemingly disjointed musings that I wanted to launch into the universe for anyone reading my blog today - I thought - let's talk flower. Each subject is a message.

By far the most important message is this, the first one;

Some of you are familiar with Nan Reinhardt from the Bettyverse. Today her first book, Rule Number One, is available from BookStrand. If you click on the link, it will take you to the site where you can buy it. It's in ebook format only and from now to March 6th it is discounted and a great value at four dollars.

Come this Friday, payday, you know where four of my five dollars is going!

In a moment we'll get to message two but first I have to veer off in a different direction. I loved these things when I was a kid. We called them airplanes and we tossed them up in the air and watched them glide down. Big sigh. I showed my gkids but they weren't that impressed.

Last May I talked about another book I love which has stuck with me: The Butterfly's Daughter by Mary Alice Monroe.

Recently I decided to check out some of Monroe's previous books.

I read The Book Club. It was an absorbing, pleasant read. It was about five women who came together in, of course, a book club. Before the book was over they had all gone through transitions that arced them as people and strengthened their friendship. It has hopeful, happily for now, endings for all five main characters. It's the kind of book that makes me long for a book club of women friends; (much like The Jane Austen Book Club by Karen Joy Fowler, movie also fabulous).

I have to say, though, Crusie could use this book when she is trying to prove that epilogues are unnecessary and/or evil. The epilogue was irritating and detracted from an otherwise flawless book.

Now I've just dipped into another Mary Alice Monroe book, titled, Skyward. So far, I'm loving it. It has several elements I like in a book. The love interest is Harris who lives his life to save wounded birds of prey. I'm learning new bird-related words, such as, Accipters: The Woodland Darters. These "agile, determined hunters...include sharp-shinned hawks, Cooper's hawks and goshawks."

Another veer off subject here, but some time ago I was with a bird-watcher on the side of Mt. Lemon near Tucson, AZ. He had positioned his binoculars on a level surface so that I could easily spot a Northern Goshawk that he wanted me to see. I looked through the binoculars at the same moment that the bird turned her focus my way and I jumped back. That bird's stare was lethal. It increased the respect and admiration I already had for birds of prey. 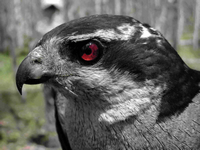 Imagine her looking directly at you.

Back to Skyward by Mary Alice Monroe; another element in the book is a culture that is new to me: Griots. In the Lowcountry of South Carolina, African-American oral historians, or griots speak the Gullah language. M.A.M. was "fortunate to have the guidance of Queen Quet of the Gullah/Geechee Nation in writing Lijah's dialogue". (Lijah being a character in the book whom I already love.)

I can predict that the unfolding story is going to move me tremendously. Harris is a single father and his five year-old daughter, Marion, develops juvenile diabetes prompting him to hire live-in nurse, Ella.

Foreshadowing tells me there will be major problems along the way. HEA is the end which I know because I read it first. Yes, I'm one of those. Sue me.

(Thistle seed blowing in the wind, in case you're wondering. This message has nothing to do with misanthropy, though. I'm using it as a winged seed to represent a message not as thistle to indicate that I hate humankind.)

I have read some creative memoir and thoroughly enjoyed it. Recently I was in a coffee shop and I picked up a book called Zero Break: An Illustrated Collection of Surf Writing, 1777-2004 by Matt Warshaw. There was a story inside by Susan Orlean. I've read one of her books, The Orchid Thief, before and I was fascinated.

Susan's story in the surf book inspired the movie, Blue Crush. That was news to me. Blue Crush is a corny,YA chick lit movie that I secretly love. Outstanding photography of the pipes, waves, ocean-in-general and surfing make the movie worth watching even if the story doesn't grab you.

Personally, I wasn't moved by anything else in the surf book (YMMV) so I decided to see if the story was published in something that was strictly Susan Orlean. It was; The Bullfighter Checks Her Makeup: My Encounters with Extraordinary People. And I ordered it. And it came.

All this to say, I'll soon be writing a Susan Orlean post and to ask - have you read any creative memoir? Did you like it?

While y'all ponder that, I'm going off to make a cup of hot chocoate and read the rest of Skyward by Mary Alice Monroe.