My second husband always considered me to be a great cook and a terrible cook at the same time. He, of course, being a great cook all the time. And he was. But he knew it, in that obnoxiously vain way that is part of his charm.

He would tell you that I'm a great cook because I cook delicious food. In his opinion, I'm also a terrible cook because I can never make the same thing twice. I would find a recipe and make it and it would be good. However maybe I didn't have the vegetable broth it called for so I substituted ginger tea instead. Next time I made the same recipe, he would sit down wanting the same taste as before. He wouldn't find it because I had forgotten about the ginger tea and gone back to vegetable broth.

I dearly love casseroles. The idea of dinner all in one pan that I put together and then leave in the oven for a while pleases me greatly. Add a salad and voila, hearty meal.

I was on a mad dash through  the library with my list and I saw a book on the end of one of the aisles that I had to snatch up - The Casserole Queens Cookbook by Crystal Cook and Sandy Pollock. When I got it home it turned out to be good enough to go on my book buy list.

We are having a very late birthday dinner for a couple of family members and they wanted chicken fettuchini alfredo. I pulled out the cookbook and lo and behold right there on page 74 - Chicken Penne Pasta With Pink Sauce. I showed the birthday folks the recipe and they thought it sounded good.

(Rotini noodles which, btw, we have a lot of in the cabinet already. And since Megan is a bad influence and now I prefer to use things we have already even though I don't participate in Lent...)

So here is the mutated recipe I went with: (Remember John Larouche  told us mutation is good.)

Directions:
Cook, drain and set aside pasta.
Coat chicken breasts with OO and s&p. Bake until cooked through. Cool. Dice and set aside.
Preheat oven to 350 F. Coat a 9 by 13 casserole dish with cooking spray.
In a large skillet over med heat add OO, chicken, ham, garlic and basil. Cook a few minutes.
Add chicken mixture to pasta mixture.
Mix marinara and alfredo.
Layer half chicken-pasta mixture, 1 cup pink sauce, other half chicken-pasta mixture, rest of pink sauce.
Sprinkle top with parmesan. Bake 25 to 30 minutes until heated thoroughly & parm is melted and brown.

Here is a picture of the casserole in the pan: 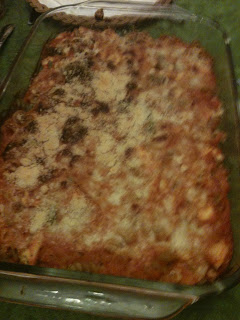 A serving of casserole: 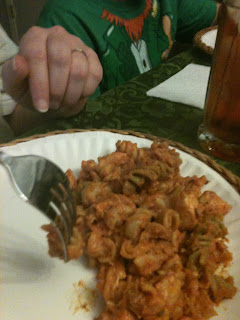 You can't have a birthday dinner without a cake and they wanted the lemon icecream cake I made once, forever ago for a Mother's Day tea we had. Yeah, right. Long since lost that recipe. Found the closest thing to the recipe that I remember  here except I tweaked it to be a one layer (9 by 13) cake.

Here's a picture of the cake: 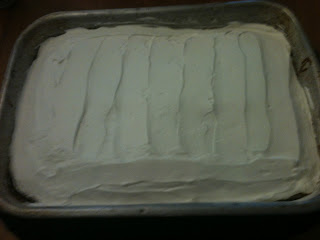 (Ignore the ugly pan. I had a little mishap with the original pan. If I tried to tell you about all my cooking mishaps, we'd be here all day.)

A serving of cake: 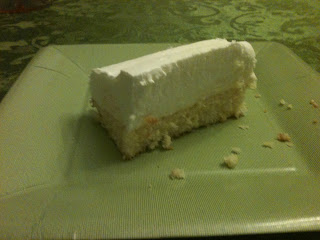 
Speaking of tea (yes we were - see above sentence starting "you can't..."), I know I wasn't going to read any books while I'm writing my break out novel (haha) during Savvy Author Bootcamp but this one arrived and I couldn't resist:

"She watched the tea leaves dance and twist in the teapot. The agony of the leaves, it was called. The tea leaves doing their dance as they gave up their essence to the steaming water." from Agony of the Leaves by Laura Childs

This is her 13th Indigo Tea Shop mystery book in the series and I'm still enjoying them. I haven't written about them. I did write about her Cackleberry Club series here.

Since English Breakfast is all I have, I think I'll go with that. What about you?
Posted by Judy,Judy,Judy. at 12:05 AM