UPDATE - BREAKING NEWS: Some writers from SAB have followed me to Chocolate Bootcamp so willwriteforchocolate now has 7 MEMBERS. Competition for that chocolate is going to be stiff! HEHEHE what fun!

Before we get into nightgowns (hehehe I'm already in mine) we have a couple of other things to talk about.

Savvy Author Bootcamp Update: I will put a wrapup blogpost out on May 1st.

May 1st will be the first day of the newly formed Chocolate Bootcamp For Writers. If you are interested in joining us go here for details.

For over a year some time now I've been planning to take these 3 pieces of fabric: 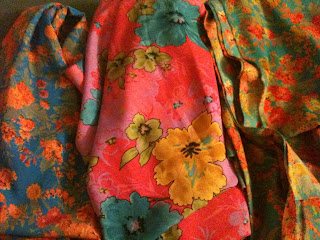 and 3 of these white, ribbed undershirts: 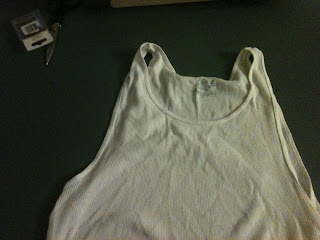 Being the lazy opportunist that I am, tonight seemed like the time since my daughter was here earlier and set the sewing machine up.  I started on number 1.

Several hours later, I had this: 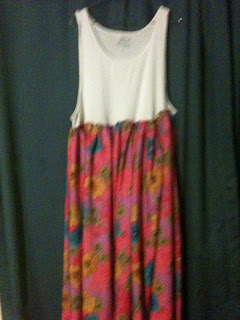 As I sit here writing this blog, I'm wearing this gown and it's not falling apart. So far so good.

For this kind of project I'm not a precise sewer. Bare necessity in measuring, cutting and seams. This time, however, I'm stopping at one until I buy some elastic. I did the old - sew a seam with basting stitch and pull the thread until it gathers the way you want. It was a pain in the ass.

The problem is, though, who knows when I'll be somewhere to buy elastic? And by then the sewing machine will be put away. And I'll have to lure my daughter over again with subliminal messages that she needs to sew something. Or I could set up the sewing machine myself, I suppose.

Big sigh. I've had this fabric for over a year. It may be another year before I get the other 2 made.

At least I have this one, though. And it's swirly, girly, colorful and comfortable. I like it.

Also, I sewed up the hole in my green pants so - SCORE!

What have you scored lately?
Posted by Judy,Judy,Judy. at 2:37 AM