A special kind of Julie torture

Okay, covert ops. Or, at the very least, vague references.

I'm smack dab in the middle of you know where, blogging about you know what. (If you don't know, then go to this Julieland blogpost and read my comment. Or stay tuned until I can be a little less covert and I'll explain.)

Big let down. Covert ops didn't work because I forgot that the person who sits in the cubicle behind me is my boss. When he first moved me there, I thought maybe I was needing more supervision. Then I realized he put me there because I'm less annoying than my coworkers who are mostly college kids. (Not that all college kids are annoying but the ones I work with...)

So anywho, I'm writing this from the relative safety of the computer room in my home.

Over in Julieland the card of the day said:
"The answer to your question involves letting go of resentment, judgment, and anger. You already know who or what to forgive: it’s the first person or situation that comes to mind."

The first thing that occurred to me was - work. Then I thought, that is so stupid because in the grand scheme of my life my j.o.b. is about as important to me as

in a room full of

Well, I do have a lot of irritation about work. And for reasons I will explain later, I probably need to let them go.

So many lies are told at work. And not just my work. The majority of workplaces. And don't try to tell me all about your heaven of a workplace because 'most' would only require 51% and I know 51% of workplaces are telling some lies.

You know what I'm going to do with those lies? 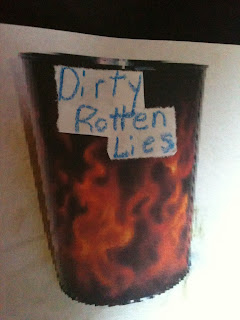 That's right. I'm going to write them on paper and throw them into a trash can labeled dirty rotten lies and then I'm going to burn them. Symbolically. Obviously I'm not going to do it literally because that would require, well, effort.

Big, bad, dirty, rotten, lie - we're not really concerned that much about money / profit / the ridiculous salaries of our upper management and stock holders - our number one concern is patient / client / customer concern or welfare.

Uh huh. On the side of the building that I'm working in right now, that's kind of true. Because it has to be. Because there are laws that make it so. But you don't fool me. I worked on the other side of the building. There you are paying people to pretend they are giving excellent whatever to your patient / client / customers when they are actually empowered to do

And you have set up your training of your poor employees so that it takes them a while to figure out that they are being paid to mislead people.


The people being misled are not having fun, either. Unlike these people on Monty Python:

Because my company, and others, are operating without integrity, and for many, many, many other reasons, people working there (and elsewhere) are

These sad, bitter people do a lot of things that are UGLY.

And it makes me furious because I don't like the world they are creating and my grandchildren will have to live and function in that world.

So guess what is in this jar?

Ashes, yes. But whose ashes?

The ashes of my coworkers who

And there are separate jars for the ones who have long, loud conversations where the concept of a 'yankee' is a real, negative thing.

I think some of you know that I am an atheist. But I want to live in a world where I can be an atheist and you can be whatever you want, including a xtian. It is difficult to not develop resentment for xtians when you work in a place where people have all kinds of bible verses, crosses and sayings hung prominently, yet you see them every day doing petty things and evil things, to their coworkers. And making statements that let you know, you need to keep quiet about your beliefs or they will quietly make sure you are fired for manufactured reasons that you can't fight.

There's a special, special jar of ashes for these faux pious people.

This is not paranoia on my part. I have accidentally discovered 2 other atheists who work there and they both agree, undercover, or fired.

So, I fling all of this bad energy out into the light so it can burn up in the sun.

Why do I do that? Because there's a reason. You know there is. Mama don't do nothing without a payoff. (Actually that's not true to a ridiculous extent but another time for that.)

The payoff is this: "You are preparing for a wonderful new chapter of your life, and forgiveness is part of your preparation. It is a refreshing and deeply healing shower of love that cleanses you inside and out. This gives you energy, stamina, and high self-esteem, and it frees you to be yourself."

Again from the same Julieland blogpost from the FORGIVENESS card out of the Saints & Angels Oracle Cards by Doreen Virtue.

All this letting go so that one day I can make a living without a j.o.b. and sing along with this song:

Some of you are familiar with Louise Hay. Way, way back in the day, I studied her work some. One of her affirmations sticks to me like a little piece of plastic that refuses to be flicked away, and I use it in this instance.

I RELEASE THESE PEOPLE TO HAPPINESS THAT IS MEANINGFUL TO THEM.

What or who do you need to forgive and why?
Posted by Judy,Judy,Judy. at 12:05 AM