I thought I had a blogpost subject - not so.

See I only read the beginning of this little nugget from The Lutzletter, Izzy Spellman Birthday Edition:

Rick Santorum raised more than a few eyebrows recently when he called the Spellman books "a corrosive influence on our nation's morals, plus they're not even really mysteries or all that funny." We're surprised and humbled to report that the First Lady herself took umbrage. Speaking at a March 28 library fundraiser in Illinois, Mrs. Obama defended the books..."

I read that far and I filed it away thinking to go back later and ponder in depth on the First Lady defending romance novels. Although the Spellman Files are not really romance novels. They're technically myteries.

When I went back to read the remainder of the paragraph, I found this:

"...singling out Curse of the Spellmans as her favorite. "I pretty much peed myself during the pancake scene," she said. Get the full story at  www.aprilfools.edu."

Good one, Lisa, good one.

Have you read these? If so, what did you think? 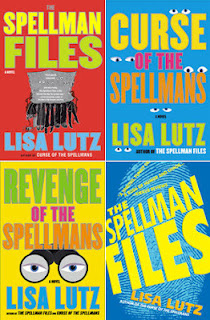 I have randomly, arbitrarily decided that I will make Friday's:

But Act One is supposed to be 30,000 words you say. You're right but I said FAST-DRAFTED. Big difference.

Fast drafting means only writing the dialogue. Everything (narrative, words you want to change, setting) else goes into brackets as notes to yourself. The end result looks like this:


"It's too late for you to be coming home making all that racket, missy," Etta Grumble grumbled. "It's indecent the way you run the roads at night."


Taffy "I'm sorry I disturbed you, Mrs. Grumble, but it is barely midnight and I was working," {pulls briefcase out of  car}


MG "Hmmpf. What kind of accountant works at midnight?"
T"I'm not an accountant, I'm a bookkeeper. And some of the businesses I work for keep late hours. I was picking up paper work." {partial lie- She was picking up paper work. In addition at her last stop she had put the paper work in her car and gone back in for a rendezvous with the scumbag bar-owner who was now permanently demoted from client/[fuck-buddy] to client only and lucky to still be that.}
MG"Hmmpf. Come on Clyde. Let's go to bed. Some of us keep reasonable hours. Don't be making noise all the live long night, do you hear me? I need my sleep or I’ll be grouchy tomorrow."
“Insomnia must be a chronic problem for you then,” Taffy mumbled under her breath.


"I said yes, mam. I’ll be quiet." {wonders why she puts up with bossy, crabby old woman acting like she's the owner and Taffy the renter when the exact opposite is true.}

See how there is direction for where I might want to go with the narrative but it's not really written. And I have the word fuck-buddy in brackets because it's a concept in the book but I'm looking for better wording. You can see how 15,000 fast-drafted words could be 30,000 when fully written.


There are reasons for writing a first draft like this. More about that later. It gives me a distinct advantage, though, because I haven't decided WHERE this book takes place, yet.

How's life outside of bootcamp with the rest of the world?
Posted by Judy,Judy,Judy. at 12:04 AM