Your Last Opportunity To Go Green

Memorial Day brings to mind burials, funerals and such. The modern funeral system is one of the many things I generally keep my mouth shut about. Except here. This will not be a rant, I promise. Just one or two stories, my opinion, a link to some facts and a couple of links to interesting places.

Today a couple of my aunts are visiting. They had a long boring informative conversation with my mother about their trip to several cemeteries. They had been to the cemetery where my mom's mom and my dad are buried.

Okay sidebar - when my dad was buried, my mom wanted to go ahead and have her name carved on the other side of his headstone. All the information except the date that she died. One of my brothers and I absolutely refused to let her do this. It is common practice but IMHO it is morbid and hideous. I do not want to be at a cemetery and see my mother's name on a gravestone when she is not dead. If they can carve the date of her death later, they can carve her whole damn thing later.

Anywho - they were going on about the state of the cemetery, the leaving of flowers, etc. Apparently they had to pull some weeds and fluff up dad's fake flowers. Do you know how old those flowers are? Fake flowers must have a half-life that rivals Uraninum 238. It's amazing they are still in the grave vase as the wind often blows all the flowers away to be trash everywhere. More about flowers later.

So then they went on talked about another cemetery where one of my uncles is buried. They were talking about mowing and weed eating and his flowers. And it was everything I could do to keep from bursting out laughing. See, I got a clear picture of what my dad's reaction and Uncle R's reaction to their concern about the state of their grave sites would have been. They would have laughed at them. They would, in fact, have ragged them endlessly for being ridiculous and acting as if the state of the hole they were buried in was important. Is this really a wise use of fossil fuel resources which are precious and which are causing global warming? Mowing graveyards?

One aunt talked about the florist they had been to in a little, tiny town and the fact that on Friday she had already made 600 memorial wreaths/sprays and would be making no telling how many more the next day. Fake flowers. When did this become the norm? Remember when people put actual flowers on graves once or twice a year and did not worry about the fact that they were going to dry up and blow away? (Still a practice in Mexico - see picture below). It's obscene to think of all those fake flowers creating trash. 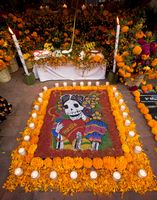 Ever heard of green burial? I'm hoping that some day it will be the new norm. There are many ways to do it.

I recently read of a place  in Florida where they mix cremation ashes in with the concrete that they use to make reef balls which eventually become coral reefs. 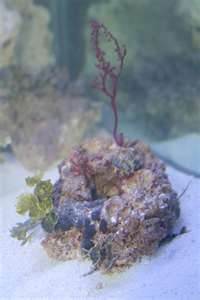 Another interesting option is some place like the Foxfield Preserve . Foxfield is a nature preserve. From their website: "As a nature preserve, we provide wildlife habitat, a clean watershed, and clean air.  Our walking trails allow the community to enjoy the beauty and serenity of the preserve." I won't give all their details here. If you're interested in all the hows and whys check out their website. 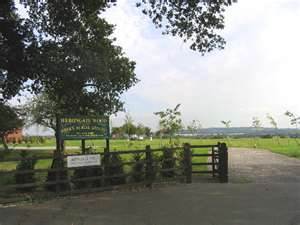 So why wouldn't one want to be buried in the way that has come to be known as 'traditional', though it is anything but? Think of the waste of resources. For facts and figures go here and read the 'Environmental issues with conventional burial' section.

See the above link for how much wood is buried. Is this a wise use of wood when we should be cutting down as few trees as possible?

Then there's the leaching of chemicals, embalming fluid etc, into our water table. Surely there is no one out there who thinks this is a sound practice.

And what about the fact that not so long ago human bodies 'recycled' in a timely manner replenishing valuable things into our soil? Instead we are trying to prevent this from happening as long as possible and instead leaching chemicals into our water system. Is this wise?

On Memorial Day or the anniversary of a loved one's death or Dia de Los Muertes, think about it - do you want to be buried in such a way that wastes wood and resources, keeps your body from decaying naturally, ruins the water table, requires gas and oil to be mowed and where people will bring fake flowers and flags that will end up blowing away and becoming more trash for our landfills?

Or is there not some more natural, creative way that would suit you?

Myself, I'm torn between the coral reef and the nature preserve.