I'm late A.G.A.I.N. However, I think I'll change things. No more deadline for having a post up. It will go up on Tuesday and Friday but sometimes it may be later. Why? Cause I seem to be wanting to write it at the last minute lately and that's okay. 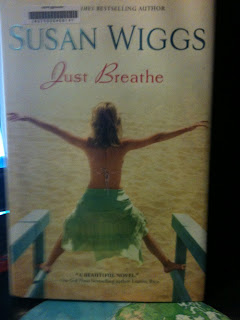 Isn't that a great cover? It's also a great book. Guess what? IMHO The cover has absolutely nothing to do with the book. I'm not even sure which character the cover is supposed to be depicting. Oh well. You can judge a book by it's cover in the sense that great cover, great book but you can't judge the contents. Er wait...the contents are great, too.

This is the first of her books that I've read and I liked it. So much so that I'm starting another one.

As you can see I got these from the library. I will read her backlog there and then put her on my buy list from now on.

The story isn't a simple one. Boy and girl are married. Boy recovers from cancer. While girl is trying to get pregnant boy has an affair. And that's just the backstory.

"She picked up another and threw it. Take that. And that. One after another, she hurled the eggs, and when she ran out, she moved on to the lemons and oranges and potatoes. With every throw, the poison ebbed as though sucked out to sea." Just Breathe by Susan Wiggs

The characters are well developed and likable. They're not perfect. Both heroine, cartooinst Sarah Moon, and love interest, firefighter Will Bonner, have family drama to overcome and arcing to do. You want them to win. You cheer them on.

"She slugged his arm, and then they ambled along in companionable silence. She and Will were  not dating. That would be insanity and they both knew it. They called each other, though. They went for long walks on the beach at sunset. They had dinner together and sometimes there were candles involved. But they were definitely not dating." Just Breathe by Susan Wiggs

The setting is a world that you're happy to live in long enough to finish the book and sorry to leave when it's done.

"There was a picnic in Town Park, races on Children's Beach and a sailing regatta across the bay. The fishing fleet strung twinkling lights through the rigging of every boat, and live bands took turns performing all day and into the night." Just Breathe by Susan Wiggs

There's an endearing happily-ever-after that is not the least bit sappy and a short little epilogue that even Jenny Crusie might approve.

I need a year by the ocean to sit and read . How long would it take you to get through your tbr list?
Posted by Judy,Judy,Judy. at 1:51 AM