A Spicy Book and a Spicy Salsa

Sometime ago Cindy Gerard wrote a blogpost that included her sister Wanda's salsa recipe for the blog shared by many writers I love (Lois Greiman, Kathleen Eagle, etc.), Riding With the Top Down.

The recipe sounded good and I love a good salsa so I finally got around to making it. Of course, I can never use a recipe as is, so I left out the chopped onions and the minced onions and put in 2 generous tablespoons of onion powder instead. I like the flavor of onions but not the taste. 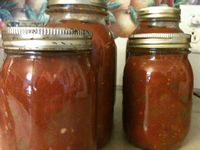 Isn't it pretty? Next time I will only add half the sugar called for, though. It's delicious but just a teeny, tiny bit sweet for my taste. Here's a close up: 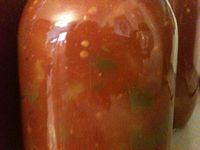 The yellow bits are yellow tomatoes. Also, I didn't process it as the recipe calls for. We eat salsa pretty quickly so there's no chance it will languish on the shelf for more than 6 months. I put the hot salsa into hot jars, topped them with heated-on-the-stove hot flats and rings. They all sealed so I'm good to go.

And did I mention: delicious. I did but a second mention is well deserved.

One of my favorite writers is Melissa Bourbon aka Misa Ramirez.

I knew she could write funny because of her Lola Cruz books which I thought I had written about but I hadn't. I will remedy that when the next one in the series comes out.

I also knew she is one of my favorite romantic mystery writers. I reviewed her Magical Dressmakers Mystery series here and here.

Guess what? She can also write very dark and sexy. She writes for Entangled Publishing and they have a new imprint; Dead Sexy. She is writing a trilogy for the Dead Sexy imprint called the Deadly Legends Romantic Suspense Trilogy.

The first book out is Sacrifice of Passion and is about the legend of the chupacabra. It is definitely dark and sexy. Also a little on the scary side but not enough to chase me away.

Hehehe - new word discovery, too.
"This is no coyote kill, Braido. Look at the holes on the neck. Then look at the gums." He pointed. "White. I'd lay money there's hardly an ounce of blood left in the poor thing. It's been exsanguinated."

exsanguinated - to be drained of blood  What an awesome word!

This is what Melissa's website says about the story:

"She ripped his heart apart…
Vic Vargas planned to marry Delaney West, but when she suddenly left town—and him—behind, she turned from the love of his life to the woman who’d torn his world apart. Now, twelve years later, she’s back, and the walls protecting his heart are crumbling."

"He betrayed her trust…
The night she and Vic were supposed to meet at the Chain Tree and elope still haunts Delaney. He left her there, at the mercy of someone else. Coming home to San Julio was supposed to help keep her sleepwalking at bay. Instead, it’s opened up old wounds, and put her in the path of the so-called legendary monster tormenting San Julio."

"Now time is running out…
With a killer on the loose, will Vic and Delaney learn to trust each other again, or do the roots of betrayal run too deep?"

If you like dark and sexy with a very suspensful plot and a happy ending - you will love this book.

So how do you like your salsa? Spicy or mild?
What about your books? Dark and sexy? Light and they kiss as the sun sets at the end of the book?