It's Friday. It's been a rainbow week. You know, some rain, then some sunshine and a rainbow, metaphorically speaking.

I'm not going to talk much about the rain because it's work related. I'll just say that some employers do not know how to treat their personnel in a manner that encourages positive, long-term relationships with quality employees.

Although, I'm not liking this metaphor as much now that I realize it paints rain as bad. Rain isn't bad. One of my favorite things as a kid was to put on my bathing suit and run around outside in the summer rain.

A couple of people were definitely rays of sunshine this week.

Over on the Debutante Ball it's been her launch week. Slightly confusing considering that her book, In A Fix, doesn't hit the shelves until September 4th. They are launching it this week, though, because it's been a year and it's time to change debs. Time flys!

Anywho - she's been answering questions - and some of those questions are about plotting novels. I read an arc of Linda's novel and I can honestly say - she's an expert plotter. Wait until you read her funny, funny, page-turner of a book.

Linda is a pantser. She says of her writing style:

"In a way, writing is like interactive reading for me–I sit in front of my laptop, think of what I’d like to see there on the screen if I were reading instead of writing, and then I type it. I start at the beginning–chapter one, paragraph one, line one–and keep going until the end. (Linear Linda, that’s me.) Not that I don’t go back and change things if necessary–I do. Sometimes something will happen later in the book that means what I wrote earlier won’t work, and I’m not so rigid that I refuse alterations."

This, and some other things she said, freed something inside of me. I've been stuck because I've been trying to fit my writing into a rigid structure that just doesn't work for me. Later for that! 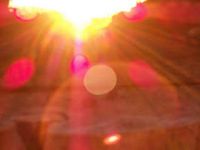 Ray of sunshine # 2 - Micki - one of the writers on willwriteforchocolate yahoo group posted a message about her own writing techniques. She said:


1. Have someone new come into the scene."

This is just part of what she said but it was what got me moving. I'm adding a minor character who will add spicy banter and edge and move the plot (and me) along nicely.

Great quote from John: "Because the forces of evil are arrayed against the desire to write. And the biggest evil of all is the need to be good. Burdened by the unrealistic expectation of all quality all the time, we often find that we just can’t write at all."

Thanks Barbara and thanks John.

As for the rainbow - pretty simple really. I wrote today. On my WIP. And I know I'm going to write more. Today. And possibly tomorrow. I don't want to jinx myself but I think I'm back on track.