“I was afraid of men for the same reason I was afraid of frogs—because I couldn’t predict which way they would jump.” The Provence Cure for the Brokenhearted by Bridget Asher

I'm sure that women reading this are nodding in understanding of the sentiment. Writers are asking themselves - why didn't I think of wording it that way? Very, very clever.

Here's what shelfari.com says about The Provence Cure for the Brokenhearted by Bridget Asher:

"Heidi is still reeling from the death of her husband, Henry, two years earlier. Heidi can't bring herself to return to the bakery she and Henry ran, and her son, Abbott, is consumed with grief, which is manifesting itself through his obsessive-compulsive behavior. Heidi's mother believes she knows the perfect cure and sends them, along with Heidi's gloomy and sullen 16-year-old niece Charlotte, hiding her own secrets and miseries, to their family home in Provence, where Heidi hasn't been since she was 13. The house has been in Heidi's family for generations and has long been viewed as a living, breathing force that brings miracles. Heidi is initially tasked with the repairs and upgrades to the house, but it, along with her elderly neighbor and her neighbor's son, starts to repair Heidi and Abbott and Charlotte and bring them closer together to form a new family unit."

“—whereas I would start a to-do list with things I’d already done so that I’d have the pleasure of crossing them out.” Heidi, protag of The Provence Cure for the Brokenhearted by Bridget Asher

Now that is a heroine I can relate to. I thought I was the only one who did that.

“I felt the smallest inkling of desire—the step before wanting to create, the want to want to create.” The Provence Cure for the Brokenhearted by Bridget Asher

Writers out there - have you gone through long periods without writing? Have you ever felt this want to want to create? I have.

“Thank you. Merci.” My mother had once told my sister and me to listen for the word mercy inside of merci. I could hear her saying, “Merci, mercy. Do you hear it? One language hidden inside of another.” The Provence Cure for the Brokenhearted by Bridget Asher

There Ms Asher goes again - putting something in a very clever fashion. Many moons ago in Spanish class I was struck by how many of our words are almost their words. "One language hidden inside of another." I love that.

“Near Les Halles, we came across a giant statue of a tilted head resting in an open palm. We took turns posing with it as if we were picking its nose.
We were Americans, after all.” The Provence Cure for the Brokenhearted by Bridget Asher 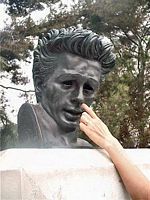 I'm of two minds about this. On the one hand, we're known worldwide as ugly Americans for things like this. On the other hand, it's funny and maybe one of our jobs is to say to the world at large--LIGHTEN UP ONCE IN A WHILE. (Also - you'd be amazed at how many pics of people picking statue noses bing images has on file.)

“C’est comme ca,” I said.
“What’s that mean?” Abbott asked.
“It means ‘it’s like that.’ It’s a French expression,” I said.
“Because sometimes things are just like that. That’s all. It’s just—like that,” Julien said. The Provence Cure for the Brokenhearted by Bridget Asher

The better part of the book takes place in France. Asher takes full advantage of giving us a dose of another culture; French food, French scenery, French customs and lots of lovely French expressions like the one above.

It's a well written book full of lovable characters that I cared about right away.

But then, could we expect anything less of the woman who wrote The Pretend Wife which I blogged about here?

Do you like books that immerse you in another country or culture?
Posted by Judy,Judy,Judy. at 6:43 AM