don't judge a blogpost by the pics 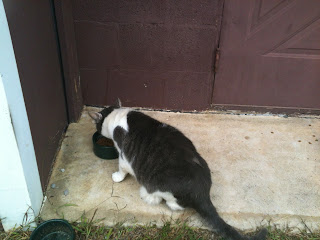 I'm starting off my blogpost with a pic of my cat, Bernie, eating. Bet you think that means this will not be a blogpost about a book.

This is a blogpost about a really good book: Enchanting Lily by Anjali Banerjee.

So why the cat pic?

Because there is a quirky cat in the book who has his own point of view. That's right, little pieces of the novel written from the cat's voice. And no, it's not pages and pages of meows. Honestly, you people are so silly sometimes. Or is it me? Don't answer that. 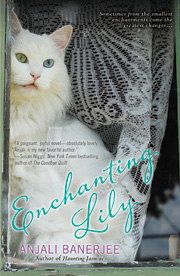 In the book a widow moves the remainder of her life to Fairport on Shelter Island in the Pacific Northwest. A lot of what she has left is vintage clothing and she opens a store to sell it.

A wandering cat comes along and she meets the local vet and his teenage daughter through her concern for the cat.

The cat has some enchantments about it.

The characters are small town nosy yet neighborly. The protag, hero and daughter all have their faults and their lovable quirks.

The book has special touches like a mention of using herbal southernwood, also known as Old Man like mothballs.

And someone with madrone colored hair. This refers to a tree with a pretty red berry so I'm assuming red hair.

It's a sweet book that I thoroughly enjoyed with a happy ending and an epilogue in the cat's pov.

Anjali Banerjee has written several other books that I plan to check out.

PS. I can't use a pic of Bernie without using a pic of his handsome brother Blackie: 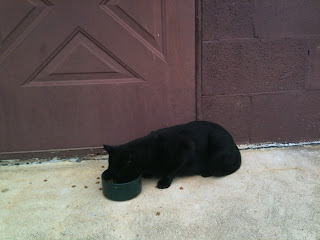 I can't seem to get a pic of the cats unless they are eating as they won't be still otherwise. And when Blackie tucks into his food he won't look up for anything. So what you can't see is that he has the most beautiful green eyes.﻿
﻿
﻿
Posted by Judy,Judy,Judy. at 12:05 AM