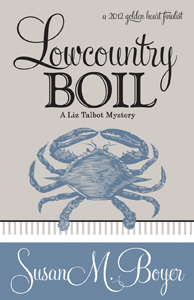 Her best friend Colleen is back after fourteen years. Of course, she's a ghost. "I almost didn't recognize her. She looked fantastic for a ghost." Lowcountry Boil by Susan Boyer
Apparently that's not too unusual.
"If you grow up in the South Carolina Lowcountry, you're generally tolerant of ghosts, haints, spirits and the like. Charleston County has more supernatural entities per capita than anyplace else in the country." Lowcountry Boil by Susan Boyer


Her business partner in her PI business is her evil ex-husband's brother. "Nate is the same flavor of blond-haired-blue-eyed handsome, but Nate's a good guy." Lowcountry Boil by Susan Boyer


Her gram died. But she left Liz her house, the contents and the 300 prime acres the house sits on, on Stella Maris island. Of course, Liz's life and business are on the other side of South Carolina.


Turns out, her gram was murdered. And Liz, being a PI, and a granddaughter who loved her gram, is determined to find the killer. Determined enough to move home to Stella Maris. But her brother, the local sheriff, is determined not to let Liz investigate.


And then there's Michael Devlin. Liz should have, would have, married him years ago except her bitch of a scheming cousin tricked him into marrying her instead. But it looks like their marriage is on the rocks.


This is an engaging, page-turner of a book that you will not want to put down. The mystery gets solved but the ending leaves you hanging about Liz's romantic life and wanting more of all the characters and the lowcountry culture.


That's okay, though. Because it's the first book in a series and I will definitely be reading book 2.
I love getting in on the ground floor of a really good series. Don't you? Linda Grimes series starting with In A Fix is bound to make me lmao through every book. This series is bound to make me sit on the edge of my seat, breathless, unable to put it down, through every book.
I feel lucky.
So what exactly is a lowcountry boil? 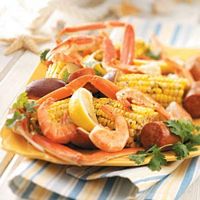 It's a South Carolina recipe involving seafood, at least crab, sausage, potatoes and corn. Here is a recipe from Taste of Home magazine.
I'd like to say it looks good, but I'm not a fan of seafood.
I am a fan of this book, though. Thanks Robena for the recommendation.
Posted by Judy,Judy,Judy. at 3:31 AM