What have you been up to?

My grandchildren and I have been up to our usual tricks. We've been reading graphic novels. My grandson will frequently sit me down to the computer and show me what he needs to add to my book buy list. Whatever is the latest in one of three series of books is what he's after. 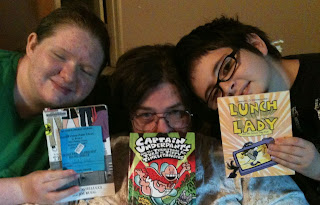 Let's talk some Captain Underpants. Are you familiar with him? The amazing Dav Pilkey is the author/illustrator of this series of books. Normally on Dav's website you can veiw many things such as a little video telling you about the history of this series. Right now the site is under renovation so I'll paraphrase:

Dav spent years sitting outside classrooms where he was in trouble for drawing cartoons which were "never going to earn you a living". Finally in college he had a visionary teacher who said to him - "these comics are going to be your livelihood".

Dav did what every kid wants to do in their head. He created two best friends who retaliate against bullies, mean teachers and principals, and generally rule the school. And they have fun doing it. And you have fun reading it.

The man is a creative genius. Truly. Berserk, bothered and bananas, but a genious nonetheless. He's created many graphic novels. There are 8 books in the CU series and the ninth and final one is out in January. My grandson will be reminding me frequently when it's time to order.

Another of his faves is the Lunch Lady series. This is the creation of JarrettKrosoczka. He says that his series came from going back to his elementary school as an adult and seeing the same cafeteria lady. He wondered what her life was like. He daydreamed a life where she and her co-worker were superheroes. In the books they have a secret room behind the cafeteria where they create gadgets such as the sporkphone and the catsup packet laser beam which was recently used to cut the lunch ladies way into the bad guys studio.
There are 7 books in the series and he is working on #8.

Then there are the Jeff Kinney books. Some of those have been made into movies. We saw the most recent one, Diary of a Wimpy Kid: Dog Days at the drive-in recently. It was so funny.

My granddaughter reads Judy Blume,  Megan McDonald and Jim Benton. She is 14 now and her tastes have become more sophisticated.

She has started the first one, The P.L.A.I.N. Janes by Cecil Castellucci and Jim Rugg , and she loves it. Apparently the Janes are secret gorilla artists.

The thing with these books is - we read them together. I can't urge you enough to spend time reading with your loved ones. It's a thousand times better than television. And you don't have to be in the house to do it. It can happen anywhere.

Do you read out loud with anyone? Tell us about it.
Posted by Judy,Judy,Judy. at 5:23 AM