Let's have some fun

I'm not a big television fan but there are a couple of shows I like. One of them is the new Hawaii Five O. I like it for several reasons, not the least of which is:

Alex O'Loughlin who plays commander Steve McGarrett. As I watched the show tonight, I had a thought and it has really stuck with me. There's another role Alex O'Louglin would be perfect for:


I know that there are some of you out there, (Linda Grimes), throwing popcorn at my blog on your computer screen right now because you like the current James Bond*:

*btw just as an innocent sidebar, do you think the size of that gun is any indication of the size of other things?

I love Daniel Craig as James Bond and, as long as Linda will keep letting him out of her basement long enough to make movies, he should still be 007, but let's visit reality; he's going to get tired of the role eventually and I think we should start floating the notion now - Alex O'Loughlin  - the next James Bond. 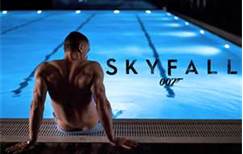 And I really think he measures up in other comparisons, too.
George Lazenby as Bond: ﻿
And, my personal favorite - Roger Moore as Bond:

whispering naughty things in your ear using this accent:
﻿
It's enough to make this woman's nether regions all tingly.
So agree with me ladies, let's start a movement, Alex O'Loughlin as the next James Bond. When Mr. Craig is through, of course, because - yum.
Which is your favorite Bond?
(Oh and I know I've left out a Bond. That's because he is guilty of conduct unbecoming a Bond, IMHO. YMMV and if you want to vote for him, I promise not to hold it against you. I was never attracted to him to start with and after witnessing this:
he repulses me. I think it's bizarre how Walters sort-of defends him afterwards.)
Has anyone seen Skyfall yet?﻿
﻿
Posted by Judy,Judy,Judy. at 2:08 AM