Non-fiction book: 101 Things To Do Before The Apocalypse by Author: Jon Hanson

At some point in time one of those people who need to predict the end of the world decided to put his sandwich board away and focus on finding some gimmick to make his prediction seem more real. Voila - the Mayan calendar prediction. Any one with a lick of sense knows that the Mayans are being abused in this situation. They never predicted the end of the world.

As food for thought, though, let's pretend they did, and they're right. The world will end December 21st, 2012.

If the apocalypse happens, do you want to go out with a whimper or a “big fat proverbial bang?”

That's what Jon Hanson asks in his ebook - 101 Things To Do Before the Apocalypse. Then he shares his handy list of things to do if you're on the bang side of things. You whimperers are on your own.

Some of his suggestions could be done exactly as he has written them. Others you might have to tweak to suit your own tastes.

For example - #20 Go To Work In a Gorilla Suit. It's funny but it doesn't quite do it for me. I would steal his concept and change it to better suit my purposes.

I work with several fundamentalist, zealot-type religious people. Despite all passive aggressive efforts on my part to express the fact that I think religion and politics shouldn't be discussed at work where I can't walk away from your crazy ass, they still persist in bringing scripture and hellfire predictions into every conversation.

Instead of a gorilla suit, I think I'll wear horns and a tail. I'll dress normally for work. Then I'll add horns like these: 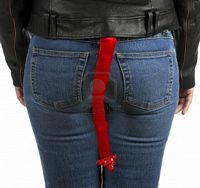 ﻿
except longer so that it drags the ground.

I'll walk into work, punch the time clock and make my way to my desk, tail dragging behind me. When people make comments or ask questions, I'll stare at them blankly like I don't know what they're talking about. The first time I need to go to the bathroom, I'll come out of the stall, look in the mirror and scream loudly. Then I'll run out of the bathroom, babbling just barely coherently about how "it wasn't a dream, I really am the devil now."

Of course, I can't do this any earlier than Dec 20th because I don't want to lose my paycheck too soon.

If the people who are disrespectfully lying about the Mayans prediction are wrong, on Dec 22nd I'll be going to the doctor to get some kind of excuse about needing my meds adjusted but I will have had my fun, so who cares.

Okay, who thinks the above tweaking of Jon's suggestion #20, proves that I am perfectly suited for his suggestion #74 Start Your Own Apocalypse Blog?

However to quote Jon, "This one may not work out the way we had planned. In the event the internet goes kaput, you'll need a megaphone. That way you can still shout your so called "blog" updates to annoyed neighbors from up on your roof. That should go over real well right?"

See, that doesn't quite work for me. Cause I live in a rural neighborhood. To truly get the word out, I need one of those car thingys that let me drive around my area talking through speakers. Yeah, that would work. And I'd be so popular.This apocalypse thing is shaping up to be fun.

It's a fun, entertaining book full of helpful suggestions but I think Jon missed one thing - just in case it really was a zombie apocalypse, I would urge people to spend some time researching helmets and maybe armor. How cool would it be, if when the zombies come around, they couldn't get to your brains or any part of your flesh?

In any case, the book could actually pay for itself. Suggestion #26 is that you bathe in your neighbors automatic sprinklers. I don't know about your neighbor, but mine spends his evenings in front of the tv swilling beer and it would take a lot more than me in my birthday suit bathing in his sprinklers to get his attention. I could probably get away with it for days. Long enough to save the $1.99 I spent on the book.

Or, if you have a blog and you agree to review the book, Jon will give you a free copy. I didn't take him up on his offer because I know his humor and I knew I'd get my moneys worth but you should feel free to do so.

How will you spend your last day before the world ends?

So far my best plan involves secreting a couple of bottles of Sangria about my person, going to the movie theatre and buying a big thing of popcorn, settling into a comfortable seat and watching repeated showings of Skyfall.

I can't think of any better way of spending my last moments, than staring longingly at Daniel Craig.