Most people reading my blog know I'm an atheist. So it probably comes as no surprise that when the book Eat, XXXX*, Love by Elizabeth Gilbert came out, I did not rush off to read it. Eventually, I got around to reading it for two reasons; one being that so many of my friends had read it and I wanted to understand the references and two being that it is a travelogue kind of book and I generally like those.

I really like the work of Frances Mayes, for example, and one of my favorite Susan Elizabeth Phillips books is Breathing Room where the down-on-her-luck heroine travels to Italy.

Sunday is the one day of the week where I don't have to 'go' anywhere. I was flipping through television channels in my efforts to entertain myself while procrastinating from doing any work on my wip. I came upon the movie, Eat, XXXX*, Love. I like Julia Roberts so I decided to watch the movie.

*(You may ask why I keep xing out the middle word. It's kind of a trigger word for me. I know that there are good people to whom it means a lot and who use it with loving kindness. But it's also thrown around in some fairly inappropriate places by some fairly opportunistic assholes. I tend to just avoid using it rather than giving it negative energy.)

Anywho - there is a concept in the movie / book that I think is valuable for everyone; THE SWEETNESS OF DOING NOTHING.

That's what I've been doing since I got off of work Sunday morning at 1am. Oh I haven't done absolutely nothing. I've read some. I've watched a lot of television. I've eaten. I've drank tea and hot chocolate and Airborne. I've started a very laid back exploration of One Note (similar to Scrivener) and started making notebooks of my manuscripts in various stages.

What I haven't done is get out of my pajamas or travel anywhere in my car or even venture outside or do laundry or wash dishes.

It's very rejuvenating, doing nothing.

Monday I usually have a couple of obligations but they both got cancelled so I continued with my pursuit of doing nothing.

Now Tuesday it's back to the busy world. Work. Laundry. Dishes. Dogpaddling. Some things with my grandkids.

I think I may enjoy it more, though, just from having taken a break.

It's kind of sad to me that mothers with young children find it almost impossible to have a whole day when they can enjoy THE SWEETNESS OF DOING NOTHING. I know most of them could use the renewal.

The movie had one other thing to offer. This man. I'm usually not 'attracted' to him, though I think he is a first rate actor, but in this movie - ooh la la: 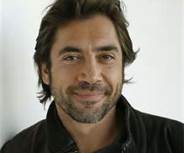 Javier Bardem
As far as her travels are concerned - I would not have gone to the same places. She went to Italy, then India, then Bali.
I might have gone to Italy but if I did, while I would enjoy the food, I would focus on going to all the places that make cameos instead. I love cameos.

For my second country I would go to Denmark. And I would make side trips to Sweden and Norway. Find out what it's like to live in a place where atheism is more the norm. No offense to all of my good, faith-centered friends. I'd just like to experience what it's like to not feel defensive about that subject all the time. Also, I could pursue Van Gogh and Klimt there.
I could certainly get into ending my journey with some time on a tropical island. I might not choose to go outside the USA for that. Hawaii seems like it has a lot to offer.
Speaking of Hawaii - I think my campaign for Alex O'Louglin as James Bond (evenually when Daniel Craig is tired of doing it) may be catching on. On Hawaii Five O tonight, the show ended with O'Louglin in a tux and one of the cast members referred to him as 007. Thrilling, huh?
If you were traveling for a year, where would you go?
Posted by Judy,Judy,Judy. at 3:01 AM