Do you ever watch cooking shows? I find it funny that I am a fan of 3 of them and all 3 mostly make food I would never want to eat. Lots of fish. Other weird ingredients.

So what draws me to them? Strong women in different settings.

First up there is; Little Paris Kitchen: Cooking with Rachel Khoo. It airs on the Cooking channel. I couldn't really tell you when it airs as I just watch it when I randomly come across it. I tend to veiw most television programs that way.

Khoo lives in a small flat in Paris with a tiny kitchen. For a while she had a 'restaurant' in her flat where she would cook an evening meal for one sitting of 2 to 4 people.

Did you ever notice how so many French women wear dark red lipstick and look great in it?

Among her recipes that I do think sound good are savoury cakes like this one: Cheese, Pistachio and Prune Cake aka Cake Au Fromage et Pruneaux.

She has a cookbook out:

Then there is Nadia G's Bitchin Kitchen. She is billed as a Chef-comedienne and her show airs on the Cooking Channel and on Food Network. Again, not sure when.

Her Cooking Channel promo describes her as - "Hilarious, entertaining and deliciously demented" She's known for her crazy outfits, her crazy kitchen and her crazy staff that do educational yet nonsensical sidebars.

She makes a lot of things with ingredients that don't sound good to me. Here's a recipe that sounds tasty, though:

She has 2 cookbooks out:

Bitchin' Kitchen Cookbook: Rock Your Kitchen--And Let the Boys Clean Up the Mess

Last up is Nigella Lawson. She has had several television programs including Nigella Bites and Nigella's Feasts. The current one is Nigellisima. I've never seen it. She's British and I love to hear her speak, both her accent and her manner of speaking. Her presentation is described as flirtatious and comedians mock her just as they were fond of mocking Julia Child.

Unfortunately for my sweet-tooth, many of her baked goods sound yummy. Someday I plan to try this recipe: 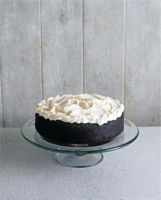 She has many cookbooks out. The latest is titled:

Nigella Kitchen: Recipes from the Heart of the Home

Nigellisima: Easy, Italian-Inspired Recipes
<><><><><><><><>
What about you? Do you like cooking?
What is your favorite cookbook?
Do you like cooking shows and if so, which ones? Do the inspire you to cook?
How do you feel about deep red lipstick?
<><><><><><><><>
All you super good researchers out there - at the end of every episode Nadia G says:
"and remember - alla bro si ma" or something like that. Maybe alibratsma. I could not find the word, phrase or whatever it is, and what it means anywhere.
I challenge you - find Nadia G's sign off.

UPDATE!
I knew one of you would get it. Thanks London Mabel. "Found it! Alla prossima - means "til the next time." (Which sounds like the French "à la prochaine")