Those of you who have been reading my blog for a while may remember that I live close to the National Quilt Museum of the United States in Paducah, KY.

If you read that and you picture old-fashioned quilts like wedding ring quilts: 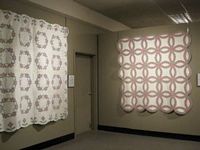 expand your thinking. They do have those but they have so much more: 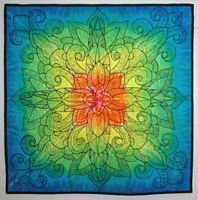 Todays quilt museums are really fabric art museums.
Every year the museum in Paducah has a School Block Challenge. Counting 2012, for 6 years now my gkids have entered a block into the challenge. So far they haven't won. Each year they add another 16" by 16 " block to their collection which they can eventually use to make a quilt.
The contestants are all given a packet with 3 pieces of fabric from Moda Fabrics. They can use as much of that fabric as they want but they have to use at least some of each.
I am proud to announce that 2012'S QUILT BLOCK ENTRIES ARE DONE! They are en route to the museum as we speak. And, yes, today is the deadline. We like to cut it close!
<><><>
Here's Jay's entry: 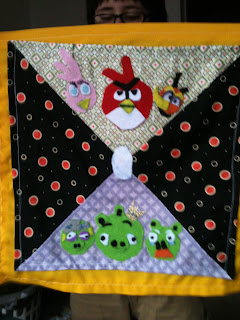 It is entitled Angry Birds Versus Egg-Stealing Pigs. Awesome, huh?
Jay is 11 years old and is continuing his pop media art theme. Some of you may remember that 2011's entry was a Smurf village and 2010's entry was Super Diaper Baby.
Here's Jay holding his quilt block: 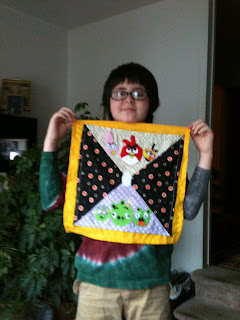 Believe it or not, the most difficult part of his quilt was not all the little felt bits that had he had to cut out and glue on. It was figuring out the size for the 4 triangles. We had to call my brother, the construction worker, to figure out how to figure out the size. And still miscalculations were made and his square was 13" by 13" so we had to sew it on the big yellow 16" by 16" square he made otherwise he would have been disqualified.
<><><>
Here is Kat's entry entitled Optical Illusion Quilt Block: 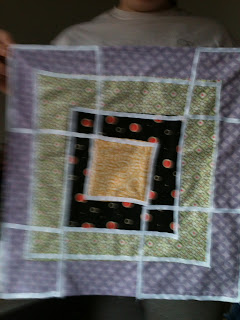 How many squares do you see? If you see more than 4 her optical illusion is successful as her quilt is really just 4 square blocks with a bunch of ribbon edging. Clever, eh?
Kat is 14 years old. This is her second year of art appreciation class. When I asked her for her inspiration, she said it came from Michael Angelo. I argued with her. Michael Angelo only did big, religious-type murals like the ones on the Sistine Chapel, right?
Wrong. He did things like his work on the Campidoglio Piazza entitled Geometrics Interlocking: 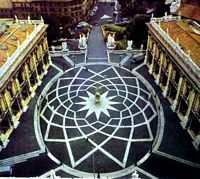 Michael Angelo's work on the piazza inspired Kat to create this painting: 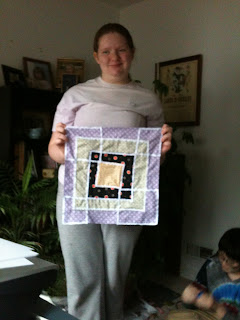 <><><>
BTW if you have a kid or a class of kids that you would like to enter in the School Block Challenge next year, it doesn't matter where in the USA you live, you can do it all via the mail. For $3. per packet, they will mail you one, you mail in your entry, and they mail it back to you after it has been judged and hung in the School Block Challenge exhibit which hangs from early January to late March.
Of course, if you are close by or want to visit, they have an excellent banquet-type affair at the end where they recognize each and every entrant with a ribbon.
<><><>
Not to keep harping on the apocalypse thing, but this was so funny I had to share. Guess what Kat would do if she thought the world was about to end?
She would travel to Paris, tour the Louvre, and sneak one of her paintings onto the wall somewhere.
Do we have a guerilla artist in the works or what?
Posted by Judy,Judy,Judy. at 8:01 AM