Some years ago I stumbled upon the most amazing book. The name of the book was Ceremony by Leslie Marmon Silko.

Here's a paragraph about Ceremony taken from the wikipedia article on LMS:

The novel tells the story of Tayo, a veteran of Laguna and white ancestry returning from fighting against Japan in World War II. Upon returning to the poverty-stricken Laguna reservation after a stint at a Los Angeles VA hospital recovering from injuries sustained in World War II, Tayo continues to suffer from "battle fatigue" (shell-shock), and is haunted by memories of his cousin Rocky who died in the conflict during the Bataan Death March of 1942. Seeking an escape from his pain, Tayo initially takes refuge in alcoholism. However, with the support of Old Grandma, he is helped by ceremonies conducted by the mixed-blood Navajo shaman Betonie. As a result, Tayo comes to a greater understanding of the world and his own place within it as a Laguna man.

One of the many reasons I found this book so amazing is that Leslie is a woman and main character Tayo is a male. A very troubled male. The book goes deeply into Tayo's head space and yet it felt entirely authentic.

Leslie has written many other books. My favorites are a novel; The Garden In the Dunes; and Delicacy and Strength of Lace which is the correspondence betweeen LMS and her friend James Wright.

While some of LMS's work is heavy reading, The Garden In the Dunes; and Delicacy and Strength of Lace are lighter yet no less genuine.

Ceremony is decidedly heavy. And at the same time hopeful. Time spent reading her work is time you will never regret..

In writing this blogpost I discovered she released a memoir which I have put on my list of books to buy as I find her fascinating.

This is what wikipedia says about The Turqoise Ledge: A Memoir

In 2010, Silko released The Turquoise Ledge: A Memoir. Written using distinctive prose and overall structure influenced by Native American storytelling traditions, the book is a broad-ranging exploration not only of her Laguna Pueblo, Cherokee, Mexican and European family history but also of the natural world, suffering, insight, environmentalism and the sacred. The desert southwest setting is prominent. Although non-fiction, the stylized presentation is reminiscent of creative fiction.

I am eager to read what Leslie Marmon Silko has to say about her remarkable life. 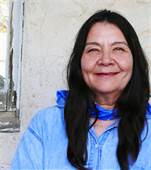 Is there someone whose memoir you would like to read?

Do you have a favorite memoir you have read already?

Tell us about them.