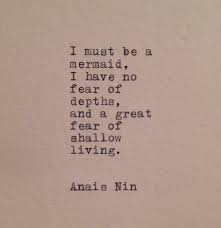 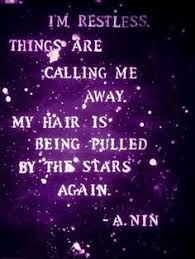 Posted by Judy,Judy,Judy. at 4:08 PM No comments: Links to this post

Will I ever stop loving Anais Nin?


"Life
shrinks
or expands
in proportion
to one's
courage."
And ahead of her time. And beautiful: A Seamless Murder: A Magical Dressmaking Mystery by Melissa Bourbon

I love Melissa's work. I blogged about this series here.

No Such Thing As A Lost Soul: A Brandy Alexander Mystery by Shelly Fredman

I love Shelly's work, too. I blogged about this series here.

I am a JAK fangirl under any of her pen names. I have blogged about her work many times. The first time is here. The blog is about a book under her pen name, Amanda Quick.

Also, I found an intriguing book on the kindle daily deal:

Home Sweet Anywhere: How We Sold Our House, Created a New Life and Saw the World by Lynne Martin

This is the amazon book description:
Reunited after thirty-five years and wrestling a serious case of wanderlust, Lynne and Tim Martin decided to sell their house and possessions and live abroad full-time. They've never looked back. With just two suitcases, two computers, and each other, the Martins embark on a global adventure, taking readers from sky-high pyramids in Mexico to Turkish bazaars to learning the contact sport of Italian grocery shopping. But even as they embrace their new home-free lifestyle, the Martins grapple with its challenges, including hilarious language barriers, finding financial stability, and missing the family they left behind. Together, they learn how to live a life—and love—without borders.
From glittering Georgian mansions in Ireland to the windswept coasts of Portugal, this euphoric, inspiring memoir is more than a tale of second chances. Recently featured on NPR’s Here and Now and in the New York Times, Home Sweet Anywhere is a road map for anyone who dreams of turning the idea of life abroad into a reality.