Here is a sentiment I suspect all female romance readers understand: 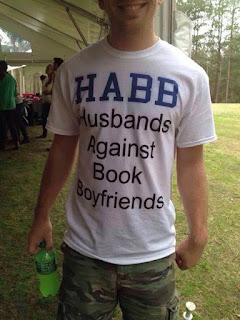 If only husbands would approach this with a - what can I learn from this book boyfriend - attitude.

If you asked me to choose a boyfriend out of a book, my first response would be brain overload with all the possibilities.

But then I think, wait a minute, do I want to live the life the heroine settled into with Mr. Book Boyfriend?

I am trying to think of a case where the answer would be yes, but I can't. I can give you a list of fictional men I adore.

1 - Roarke big sigh. Roarke is from the In Death series by J D Robb. Roarke is married to Eve Dallas. There are aspects of their life that appeal to me, like the fact that Robb has pledged to never give them children. Eve's life is okay to read but to actually face the dangers and get in the situations she does. I think not.

2 - Zane Latimer - what fun.  Zane is the hero in The Gift of Ghosts by Sarah Wynde. I love Zane. And Akira's life seems desirable. However, she and Zane are set to have children and I'm done with raising children.

3 - Joker - be still my heart. Joker is Kristen Ashley's latest hero. He is definitely swoon worthy. And the way he loves Clarissa's son even though the child is not his - that is so attractive in a man. Same objections to Clarissa's life as Akira's.

In fact, that objection is so prevalent that I am going to refer to it as reason one from now on. Reason one - I am done raising children.

4 - North Archer - nothing like a man who learns his lesson. Bet the lessons from book boyfriends would not be lost on him. But then again, he is a book boyfriend and therefore a teacher of those lessons. He is from Maybe This Time by Jennifer Crusie. Again - reason one.

5 -  Theo Harp - Annie will never have to hide her darkest thoughts from him. He is from Heroe's Are My Weakness by Susan Elizabeth Phillips. Reason one.

6 - Will Flores - Hero of the Magical Seamstress Mysteries by Melissa Bourbon. Besides being hot he is handy. Nothing more attractive than a man who is can fix things or build things. And I like Harlow Cassidy's life. I would love designing clothing. Will has a child who is almost grown. If Will and Harlow decided not to have children - I could hang with him.

7 - Sam Hooker - smoking hot Nascar driver from the two Alexandra Barnaby books by Janet Evanovich. Barney is a lucky woman. Not interested in her life as an engineer, though. Not that there is anything wrong with engineers but my mind does not work that way.

8 - Daniel Cohen  - the best kind of hero as he loves Corrina Chapman just exactly as she is. He is from Kerry Greenwood's series about Corrina Chapman. Corrina is a baker who ends up solving mysteries with Daniel and their lives come as near to perfect as possible. They aren't interested in having children. They are devoted to each other. He has a life separate from hers and yet they spend a lot of time together. She has a life I would not mind having. She reads books and has cats and friends in the building where she owns her apartment. The only drawback is she has to get up at 4am to bake. But then, she comes back home and naps.

9 - Theo Fitzgerald - quirky hero of The Wedding Bees by Sarah-Kate Lynch He again has his own life and wouldn't be in her face too much. Her life is her bees and is pretty magical. It would be good but there is a possibility that Reason One would probably apply here, too.

10 -  I'm going to leave this spot open because I am sure there is a new and exciting book boyfriend sitting on someone's computer screen right now.

Can't wait for him to materialize.
Posted by Judy,Judy,Judy. at 6:58 PM