Once there was and once there was not a water bottle named Fred. Fred looks like a vodka bottle. It amused me endlessly to drink water from Fred because people would think I was drinking vodka.

Then one day I was driving down the road the only way I know how - too fast - and drinking water from Fred and I happened to think - what if a policeman saw me. He would never believe this is water I am drinking.

So I put Fred aside in favor of other water bottles.

Work has been very stressful lately and I have taken to keeping cut flowers on my desk to try and improve the energy around me. To that effect I bought a hydrangea bloom the other day. I stuck the bloom in Fred for safe transport. And I liked the look of it. Except it was top heavy. So I added some colored rocks that I had. Still top heavy. I covered the colored rocks in pennies.

I took Fred to work and he amuses me endlessly. He looks like a drag queen at a Vegas show with a big headdress. 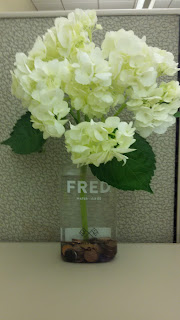 But what does that have to do with a movie? Well, Fred didn't actually watch the movie with me. He's at work on my friend Becky's desk amusing her on my days off. I just thought combining the two topics made for a good blogpost title.

A WALK IN THE WOODS is a really good movie. Years ago I enjoyed the book by Bill Bryson when it was read aloud on PBS's reading radio show.

It is not a comedy as such but there are a couple of laugh out loud places. It is a true story of Bill's walk on the Appalachian trail with his friend Steven Katz.

If looking at Fred isn't enough smiling for you - watch A Walk In the Woods!