Today I went to Nashville to the Frist Center to experience Nick Cave.

I didn't really know who he was; I was just attracted to his name. (As it happens there is more than 1 well known Nick Cave.)

One of the things Nick Cave is known for are his 'soundsuits'. 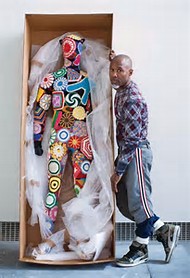 That is a picture of Nick himself standing beside one of the 'soundsuits." Several of them were on display at the Frist. This is what the program says about them

"...they speak to issues of identity an social justice - specifically race, gun violence and civic responsibility. His trademark human - shaped sculptures, made from upcycled everyday materials...playful...but began as a form of social critique. They were originally conceived as a protective type of armor in the wake of the (Rodney) King incident, when Cave felt particularly vulnerable as an African American man.  ...discarded, devalued, viewed as 'less than.' Sitting in a Chicago Park Cave began to gather twigs and sticks (also discarded and devalued)...stringing them into a wearable sculpture. ...created a second skin that camouflaged his race, gender, class and sexuality...shielding him from judgment."


He calls them soundsuits because of the noise they make when walking in them.

Other pieces of his art that were on display: 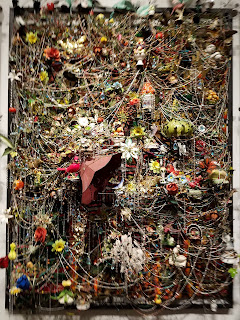 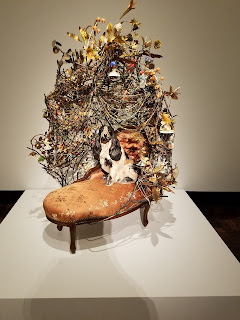 Looking at the above pieces I was reminded of something that is true of a lot of people my age - what to do with mom and dad's STUFF. Not my thing but obviously Nick Cave could find a use for it.

My favorite piece was called the 'Enchanted Forest': 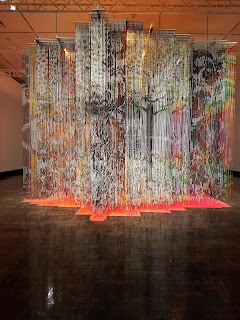 It is all long strings of found beads. And it was beautiful.

I would like to thank the Frist Center and Nick Cave for a lovely afternoon!
Posted by Judy, Judy, Judy at 11:23 AM